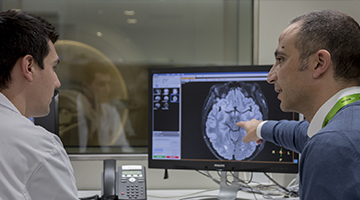 A team from Barcelonaβeta Brain Research Center (BBRC), the research center of Pasqual Maragall Foundation, has developed an artificial intelligence algorithm that, from magnetic resonance imaging, facilitates the identification of candidates for Alzheimer’s disease prevention studies. The project has been one of 21 selected from a total of 102 projects submitted to CaixaImpulse from “la Caixa”, which has the collaboration of Caixa Capital Risc and EIT Health.

“The project plans to carry out a proof of concept in a real-world environment and will allow us to study what value our technology can have for society”, explains Dr. Juan Domingo Gispert, Group Leader of Neuroimaging Research Group at BBRC. This proof of concept will be based on data collected from the Alfa+ cohort, which is made up of participants who come from the Alfa Study, which has the funding of “la Caixa”.

Alzheimer’s disease has a preclinical phase of up to 20 years, which is interesting to develop preventive treatments for dementia. During this phase, people don’t have symptoms (such as memory loss) but may have an abnormal accumulation of beta amyloid in the brain, a protein related to Alzheimer’s. Studying this stage is essential to develop preventive treatments for dementia before the first symptoms.

In order to identify the brain changes of cognitive healthy people, standard tests are necessary such as lumbar puncture or positron emission tomography (PET). However, these tests are invasive and expensive, which makes detection difficult. The new algorithm developed by Dr. Gispert’s team uses artificial intelligence to identify people with higher risk of having abnormal levels of beta amyloid. It is based on brain magnetic resonance images, a less invasive technique than standard tests.

“This technology allows the identification of people who really need the standard tests, which are performed after the resonance, and in which cases they can be avoided”, highlights Dr. Gispert. Thus, it is possible to detect which people could benefit from prevention clinical trials more efficiently. The use of this methodology would reduce unnecessary selective tests by 67% and up to 50% the costs of recruitment of people for these studies.

The CaixaImpulse program from “la Caixa”, in cooperation with Caixa Capital Risc and EIT Health, is aimed at research centers, universities and hospitals, which work on innovative projects in the field of life and health sciences. The goal is to transfer research knowledge to the market so that society can benefit.

The initiative is part of the research grants from “la Caixa”, which also include postdoctoral grants and support for research projects in biomedicine and health. In total, this year “la Caixa” has awarded 28 million euros to 79 pioneering research projects.