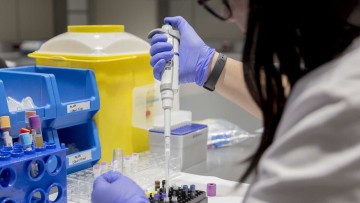 Researchers from the BarcelonaBeta Brain Research Center (BBRC), the center of the Pasqual Maragall Foundation, have established a lower cut-off that marks the transition to the pathological accumulation of the beta amyloid protein, which is one of the biological alterations of Alzheimer’s disease.

The study was led by José Luis Molinuevo and Juan Domingo Gispert at BBRC, thanks to the funding from “la Caixa”. The results of the study have been published in the journal Alzheimer’s Research and Therapy.

“The new values will allow us to detect individuals who are at the very beginning of the accumulation of abnormal levels of the beta amyloid protein, and to invite them to participate in prevention research programs in order to reduce their risk of developing dementia in the future”, says Dr Gispert, head of the Neuroimaging group at BBRC.

What are the beta amyloid plaques and how can be measured?

The aggregation of beta amyloid in the brain is a neuropathological hallmark of Alzheimer’s disease. Amyloid plaques can occur even 20 years before the onset of the first clinical symptoms of the disease, due to different causes related to risk factors such as age, genetics, diet, physical exercise, cardiovascular health and cognitive activity.  The presence of these plaques in the brain does not necessary mean that the subject will develop dementia in the future, but it potentially increases the risk of entering the clinical phase of Alzheimer’s disease.

In this study, BBRC researchers analyzed the results obtained in the PET scans with a method called ‘centiloid’. These results were compared with the biomarkers of cerebrospinal fluid in order to establish new cut-offs values for optimal agreement between both techniques. And the results, according to Dr Gispert, were unexpected: “we demonstrated that it is possible to accurately detect the subtle pathology of beta amyloid with lower cut-offs than the previously established for PET scans”. Specifically, a cut-off of 12 CL marks now the transition from the absence of pathology to subtle pathology, whereas a positive pathological concentration of beta amyloid is normally determined by a visual reading of PET scans, which usually gives a positive result of amyloid concentration between 25 and 35 CL.

The scientific director of the Alzheimer’s Prevention Program at BBRC, Dr Molinuevo, highlights that “the added value of this study is that it has been performed, for the very first time, measuring the concentration of amyloid protein in subjects without cognitive alterations but with Alzheimer’s disease risk factors, and also in subjects with dementia”. The study included data from a total of 205 participants from the Alfa Study, and 311 participants of the Alzheimer’s Disease Neuroimaging Initiative (ADNI).

PET scans of the Alfa participants were performed at the Hospital Clinic de Barcelona, with a tracer granted by GE Healthcare, and the analyses of beta amyloid protein were possible thanks to the kits given by Roche Diagnostics.

Towards the standardization of the new values

The aim of BBRC researchers is to standardize these accurate and reliable new cut-offs in order to offer to individuals with subtle amyloid pathology the possible benefits of participating in research projects or clinical trials of dementia prevention.

The next steps will be to replicate the study in the AMYPAD cohort, with thousands of research participants.