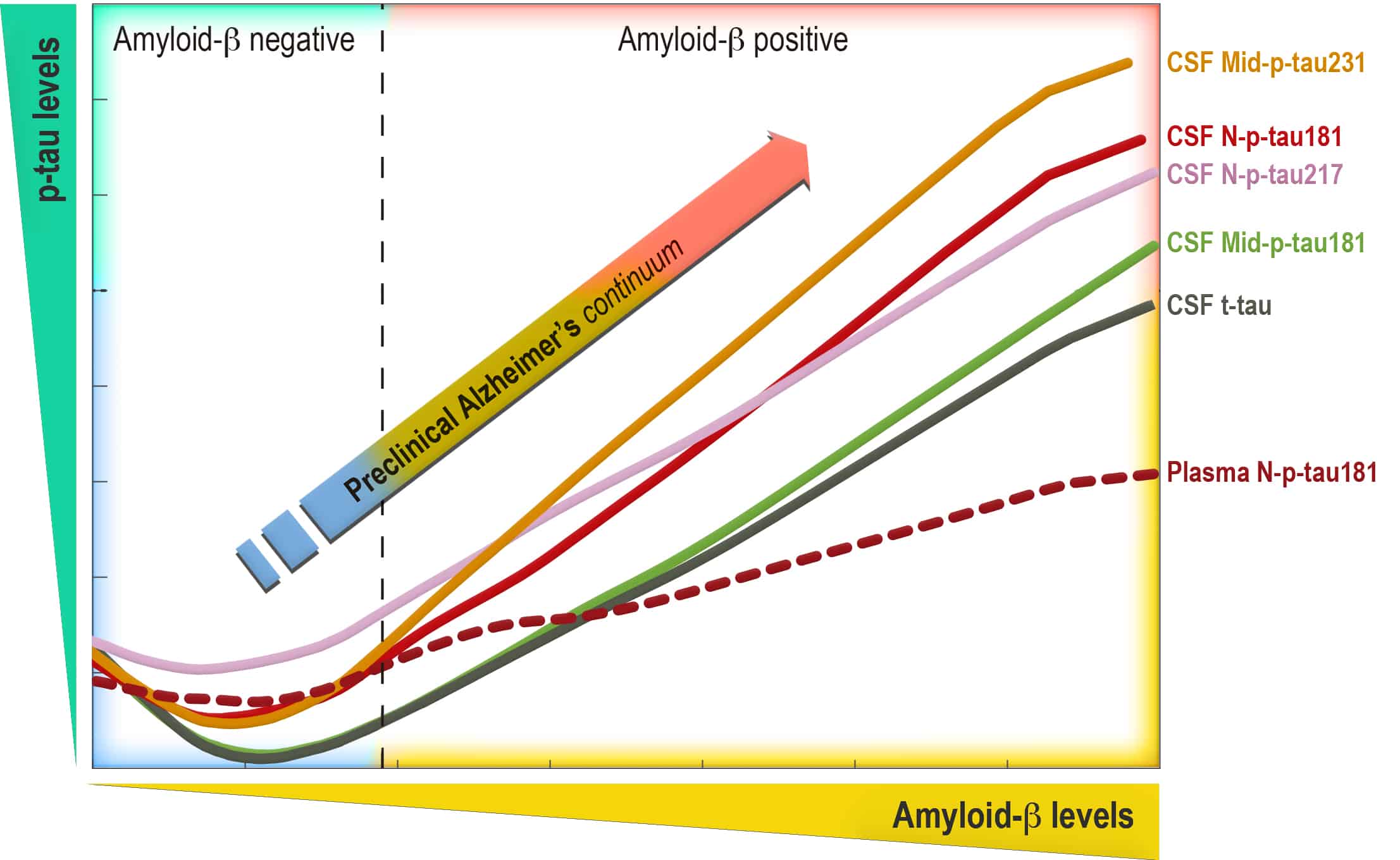 An international team of researchers, led at the BBRC, has discovered that a series of biomarkers recently described to detect the most advanced phase of Alzheimer's can also detect the preclinical phase of the disease in the cerebrospinal fluid and plasma

An international team of researchers, led at the BBRC, has discovered that a series of biomarkers recently described to detect the most advanced phase of Alzheimer's can also detect the preclinical phase of the disease in the cerebrospinal fluid and plasma

An international study led by the research center of the Pasqual Maragall Foundation, the Barcelonaβeta Brain Research Center (BBRC), promoted by the “la Caixa” Foundation, has analyzed a series of new biomarkers of the phosphorylated tau protein (p-tau), which is one of the hallmarks of Alzheimer’s, to find out if they are also able to detect the preclinical phase of the disease.

The results of the study show that some of the biomarkers that have recently been described to diagnose Alzheimer’s in the dementia phase can also detect the early stages of the disease in blood plasma (this is the case of the biomarker p-tau181), and in the cerebrospinal fluid (p-tau217 and p-tau231).

According to the first author of the study, Dr. Marc Suárez-Calvet from the BBRC, “our findings open the door to developing new ways to detect the preclinical phase of Alzheimer’s and to enrich the selection of participants for intervention or observational studies aimed at this phase asymptomatic of the disease ”.

Dr. Thomas Karikari, an assistant professor at the University of Gothenburg, who co-led the discovery commented: “The remarkable findings reported in these publications show that the new highly sensitive tools capture the earliest Alzheimer disease changes in the brain in clinically normal people. These tools therefore have the potential to advance population screening and clinical trials.”

The study has been published in the scientific journal EMBO Molecular Medicine, and was carried out together with researchers from the University of Gothenburg, the IMIM and Hospital del Mar, and the Center for Biomedical Research Network on Fragility and Healthy Aging (CIBERFES).

The role of tau protein

Many years before the onset of Alzheimer’s symptoms, two neuropathological events occur in the brain that currently confirm the diagnosis of the disease: the formation of neurofibrillary tangles of the tau protein, and the accumulation of plaques of the beta amyloid protein.

The tau protein added to tangles that form in the brain is abnormally hyperphosphorylated in the Alzheimer’s disease continuum. One of the most widespread ways to detect it, both in the preclinical phase and when symptoms already exist, is by measuring the biomarker p-tau181 in the cerebrospinal fluid.

In recent months, different studies have come to light that suggest that Alzheimer’s can be diagnosed and the degree of the disease defined by analyzing other biomarkers of the tau protein. The purpose of this study has been to check whether these new discovered biomarkers are also effective in detecting the preclinical phase of the disease.

Results in the Alfa cohort

The research was carried out on 381 participants in the BBRC Alfa + Study, promoted by the “la Caixa” Foundation. These participants are between 45 and 75 years old, most of them are descendants of people with Alzheimer’s disease, and they regularly attend the BBRC for clinical, nursing, neuroimaging and cognition tests. The participants did not have cognitive alterations, but some did present biomarkers associated with the preclinical phase of the disease.

“Our cohort of participants is one of the largest and best characterized in the world dedicated to the research of the preclinical phase of Alzheimer’s,” explains Dr. José Luis Molinuevo, director of the BBRC’s Alzheimer’s Prevention Program. Thanks to the extensive data available from the participants, the researchers have been able to analyze the presence of these new biomarkers of the tau protein and contrast it with measurements of other biomarkers in samples of cerebrospinal fluid, blood and neuroimaging tests such as Positron Emission Tomography (PET).

Research results revealed that the biomarkers p-tau181, p-tau217 and p-tau231 can detect the preclinical phase of Alzheimer’s, even when only very subtle changes are detected in the pathology of the amyloid beta protein. Likewise, they are able to differentiate between participants with and without amyloid pathology. “Our research suggests that very early changes in tau metabolism occur in the preclinical phase of Alzheimer’s disease, following the change in amyloid beta protein metabolism. Therefore, this suggests the potential role of the tau protein as a therapeutic target even for the prevention of dementia associated with Alzheimer’s”, says Dr. Molinuevo.

On the other hand, Dr. Suárez-Calvet, remarks that the biomarker detected in blood “may change clinical practice in the coming years, since it will improve the diagnosis of patients with Alzheimer’s disease, both in its asymptomatic and symptomatic phases”. BBRC researchers will continue to develop this line of research in a new laboratory equipped with the most advanced techniques to determine these and other biomarkers of Alzheimer’s disease.